WTBQ BRINGING MUSIC TO YOU SINCE 1969

One of the last privately owned community radio stations in the country and the only station in NY with LIVE call in shows.
LISTEN LIVE

WTBQ is an independent community radio station broadcasting from Warwick, New York, featuring live local talk shows and specialty programming along with Consumer Guru Clark Howard, John Tesh with “Intelligence for Your Life,” and “THE BEST MUSIC” all night. WTBQ is the last locally-owned radio station in Orange County, New York, and broadcasts on 1110 AM and 93.5 FM, throughout Orange County, part of Sullivan County, and Northern New Jersey as well as Pike County in Pennsylvania. WTBQ may be streamed live on the website and the app can be downloaded to your phone or tablet.

Although WTBQ broadcasts on AM during the daylight hours only, WTBQ has streamed on the internet 24 hours a day since 1999, the first station in the Hudson Valley to do so. WTBQ was also the first area radio station with a website, back in 1995.

WTBQ became one of the first American AM stations to use an FM translator when it began airing on January 25, 2008.

Local media mogul Ed Klein brought WTBQ to air July 27, 1969 with studios originally located in the village of Warwick. The call letters come from Klein’s young daughter’s affection for her Teddy Bear. Originally, WTBQ had a “Beautiful Music” format (dubbed “The Casual Q”), in contrast to Top 40 music, which Klein was not a fan of. In 1982 it was purchased by polka king Jimmy Sturr, who in 1984, moved the studios to the “Professional Building” located in the nearby village of Florida, New York. After another change in ownership (George Dacre’s “Goodtime Broadcasting”), the station went silent in late 1992, but returned to the air under the station’s current owner Frank “Smokin’” Truatt on July 1, 1994.

On November 30, 2007, WTBQ moved its studios from the Village of Florida, New York to the Town of Warwick, New York. On February 7, 2008, WTBQ held a grand opening and ribbon-cutting ceremony at their new studios, and it was attended by the local news media, as well as many government officials and station personnel.

Ed Klein passed on October 18, 2008, at the age of 86. Klein had requested that Dixieland jazz music be played at his funeral; WTBQ obliged by airing a program of New Orleans jazz selections during the service, with attendees tuning in on their car radios. On July 27, 2009 (at 11:10 am, of course), WTBQ celebrated its 40th anniversary with a special ceremony at the station’s broadcasting tower where a plaque was placed at the antenna site, honoring Ed Klein for signing on the station 40 years ago.

In June 2012, WTBQ moved again, to Sanfordville Road in Warwick. The new station was completed soon after, and WTBQ held another “Grand Opening” on September 28, 2012. A month after the “grand opening”, Hurricane Sandy knocked out power to the area on October 29, 2012; WTBQ was off the air for nearly a week until power was finally restored on November 4th, marking it as the second longest time period the station had ever been off the air since the silent eighteen months of 1992.

Frank Truatt has created a radio station that is unique in stature and in content, and it is one of the last privately owned community radio stations in the country. So unique in fact that The Wall Street Journal recently ran a story and pictures of WTBQ and Frank himself!

On July 1, 2014, Frank Truatt celebrated 20 years of private ownership and what he has created and continues to maintain was commemorated on the grounds of WTBQ with Senator Larkin and Senator Bonacic presenting Frank with Proclamations that were put into legislation on his accomplishments and dedication to the Community, the County and all the residents. The diverse programming  continues each day making WTBQ the #1 Community Radio station in Orange County. Sheriff Carl DuBois and many Legislators also presented Frank with certificates and proclamations. Frank continues, on a daily basis, to ensure that the residents of our Communities have a voice, and up-to-date information on all the happenings and events in the County, and of course, THE BEST MUSIC! 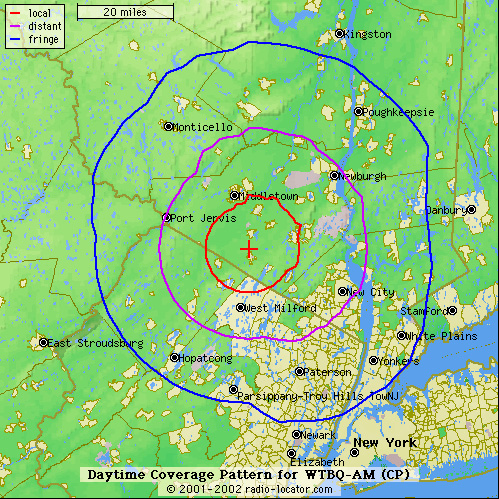 Learn more about our audience and reach new people everyday!